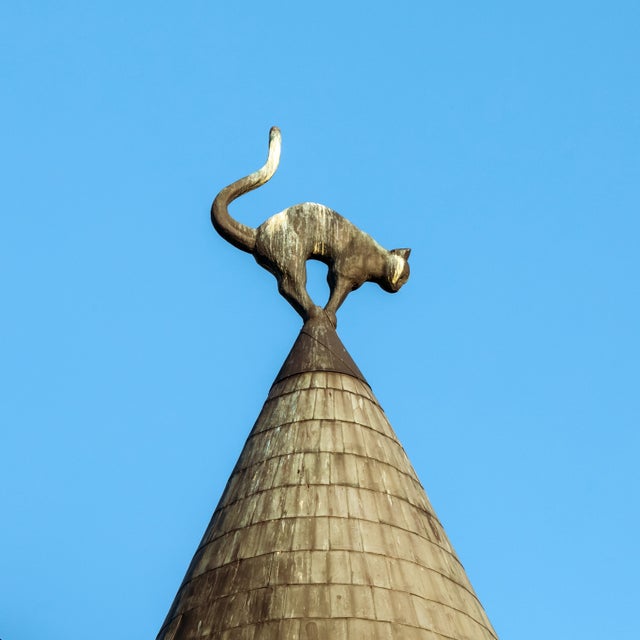 “If you look closely around Old Rīga you may notice the image of The Black Cat (Melnais Kaķis) hidden in all kinds of weird and wonderful places. This mischievous feline has become a universal symbol of defiance, and it’s all thanks to one curiously inspired man. Rīga has had a bustling shipping port for many hundreds of years, drawing traders from all over the world. One such wealthy merchant commissioned a grand house to be built opposite the Great Guild, an exclusive establishment reserved only for the greatest of tradesmen. While this particular merchant was wildly successful, he was not so widely liked, and as a result had been refused membership to the Guild time and again. Determined to have the last laugh, the ostracised merchant asked his architect to place a tower at either end of his new residence, and a local smith was commissioned to make a bronze cat sculpture to sit atop each. Once installed, however, there was tremendous outcry from the Great Guild along with a flurry of failed legal interventions. The cats had created quite the stir, with their pompous tails high in the air and their hinds proudly displaying their contempt towards his adversaries across the street. This building, now known simply as The Cat House, proved so impervious to the combined might and will of the other tradesmen that a treaty was eventually and reluctantly extended: membership would be granted in return for swivelling the two cats around. The deal was done and they have obediently faced the Guild ever since, standing as a somewhat whimsical reminder of the old adage ‘brains over brawn’. It certainly puts a smile on my face whenever I see them.”